Our lead article covers the ‘impending’ departure of Britain from the European Union. The vastness of the topic limits us to dealing with only four focal areas – trade, financial services, immigration and the total expected economic impact of Brexit.

The United Kingdom joined the European Communities in 1973, later to be renamed the European Union. It is the second largest economy within the Union after Germany, boasting annual GDP of €2.3trn, making it 4.6 times the size of the average EU economy and 210 times the size of the smallest economy, namely that of Malta (€11bn). The UK accounts for a rather significant 15% slug of the entire economic union, consequently, its intended departure should not be underestimated. 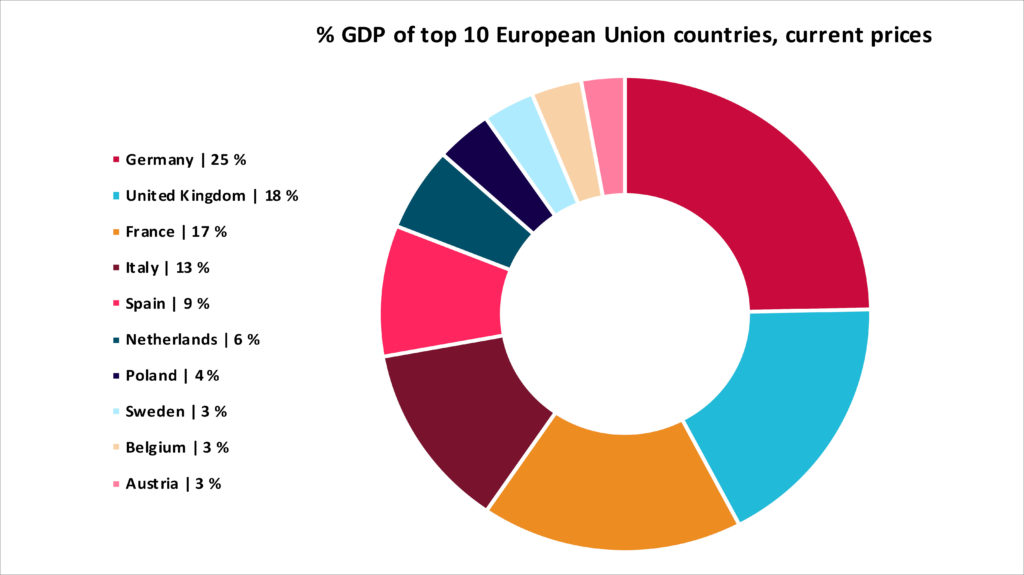 Conversely, Europe’s trade with the UK in 2017 was £341bn, implying that the UK was running a trade deficit with Europe.  About 8% of the EU’s total trade goes to the UK, but excluding EU member countries, the UK accounts for 18% of Europe’s total external trade.

Post Brexit, UK companies will need to complete customs declarations and get health checks for animal products being transported into the Union. The European Commission has provided no special waivers for Britain’s busy roll-on, roll-off ports which are of the busiest and cheapest methods of transporting goods and services between the EU and UK. Furthermore, the EU has started employing and training customs officials that will deal with trade red tape in the future. It is estimated that 80% of UK small and medium sized firms have no contingency plans in place for Brexit.

Financial services accounts for 12% of UK GDP and two million jobs. UK banks lend over a trillion euros to European companies and governments. 87% of US investment banks’ EU staff are employed in London and 78% of EU capital markets trading is conducted from London.

This is not by chance. The less stringent labour laws and strict, but non-draconian, legislation around financial services relative to the EU, has made London the perfect spot to access the European Union for global financial institutions. In addition, passporting rights, which allow British based firms to sell their products to the EU and vice versa without the need to obtain a license, get regulatory approval or set up a local subsidiary has led to seamless financial integration of the UK into the EU. It is estimated that 5 500 UK firms and 8 000 European firms operate across waters accessing each other’s market, relying on passporting.

Martin Wolf, from the Financial Times, probably best summarises what London faces as a result of Brexit – “It was emerging as the undisputed financial capital of Europe, as well as one of the world’s two most important financial centres. After Brexit, it is likely to become an offshore centre, relatively more vulnerable to policy decisions, especially regulatory decisions, made elsewhere, particularly the Eurozone.”

At the heart of the ‘leave’ vote was the issue of immigration and the loss of autonomy for the UK to decide on who should be allowed to live within its sovereign borders. Based on the House of Commons’ Migration Statistics Paper of 3rd June 2019, in the year ending December 2018:

A lack of clarity on the future of EU citizens living in the UK in a post Brexit world exists, but Britain has proposed a settlement scheme that effectively provides those, that have lived in the country for longer than 5 years with permanent residence. Periods shorter than 5 years require an application to enjoy permanent status. The sticking point is that after Brexit, new EU entrants face harsher entry requirements. The UK’s Migration Advisory Committee (source Financial Times) has published a paper with the following interesting facts on immigrants:

Expected economic impact of Brexit on the UK and European economies

There is broad agreement amongst mainstream economists that stronger trade, investment and migratory links boost a country’s economic output. With the current uncertainty as to the type of British exit that will occur, it makes predictions on the economic impact to the UK and Europe cloudy, but four factors are key to understanding future growth.

Trade barriers – it is difficult to see a post Brexit world with smooth trade between the UK and EU. Prospective trade barriers are probable and these reduce growth.

Foreign direct investment (FDI) – FDI is intimately tied to trade and in 2018, 43% of the UK’s FDI originated from the European Union. Reduced trade equates to reduced FDI and reduced growth.

Productivity – a key post Brexit issue is whether highly productive Eastern European skills migrate back home or remain in the UK.

Regulations – the EU is known to have stifling legislation that is regarded as growth inhibiting. Should the UK be in a position post Brexit to dampen this impact, it might offset reduced growth stemming from higher trade barriers, loss of FDI and possible loss of productivity.

Since the Great Financial Crisis (2008), economic growth has been muted in most parts of the world and stimulating economic activity has required Herculean fiscal and monetary interventions by governments and their central banks. Figure 2, depicting GDP growth in Europe and the UK, highlights this point. It is clear from our analysis that Europe and the UK face new Brexit challenges and that growth will be under renewed pressure. 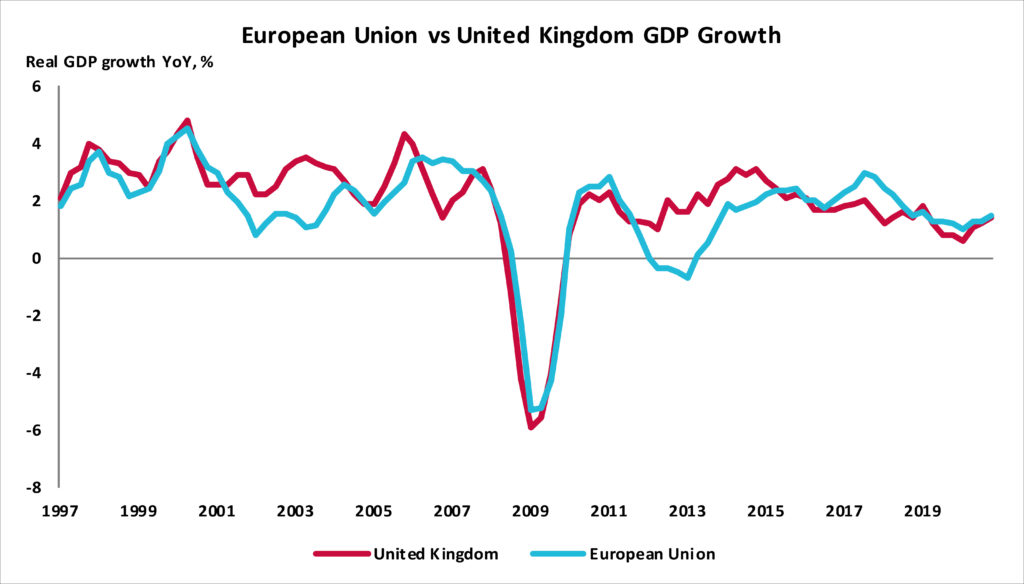 We are not underestimating the potential for serious systemic risk due to Brexit and will be closely monitoring developments in the months ahead.

all quarterly reports In the media Videos