In this article, we unpack what a debt default is, what it looks like, whether or not it can be alleviated and then provide our view of the South African Government’s willingness to change the current trajectory.

The framework applied by BlackRock to predict credit defaults captures the clear warning signs. The BlackRock Sovereign Risk Index assesses the credit risk of 60 countries, based on 30 measures and these effectively monitor four broad parameters:

SA ranks 47th of the 60 countries, a significant weakening from 33rd in 2013. The top three are Norway, Switzerland and Singapore, whilst Lebanon, Venezuela, Argentina and Egypt are most at risk. With the exception of the cushion of parameter four, which is well known and understood, we assess SA against each point and conclude.

After assessing most developed and developing countries by calculating their revenue versus debt servicing costs, it becomes apparent that once this ratio exceeds 20%, countries enter a period of fiscal strain. Chart 1 below shows how SA has started to track Argentina’s profile, well before Covid-19.

Debt used to fund productive activities including for example infrastructure, is understandable. Unfortunately, in SA, it is being used to sustain an unproductive and bloated public work-force, finance uneconomic SOE’s and is exposed to graft. Our concern is shared by foreign investors who, on a net basis, sold down R88bn bonds and R53bn equities in the first half of 2020.

What will SA’s fiscal discomfort lead to?
We model three scenarios in Chart 3 below:

Historically, cost control has only been given lip service and the consequence is that SA’s debt position has only worsened and the orange line reflects this trajectory. Hopefully government understands what is at stake and the necessary reforms are put in place. 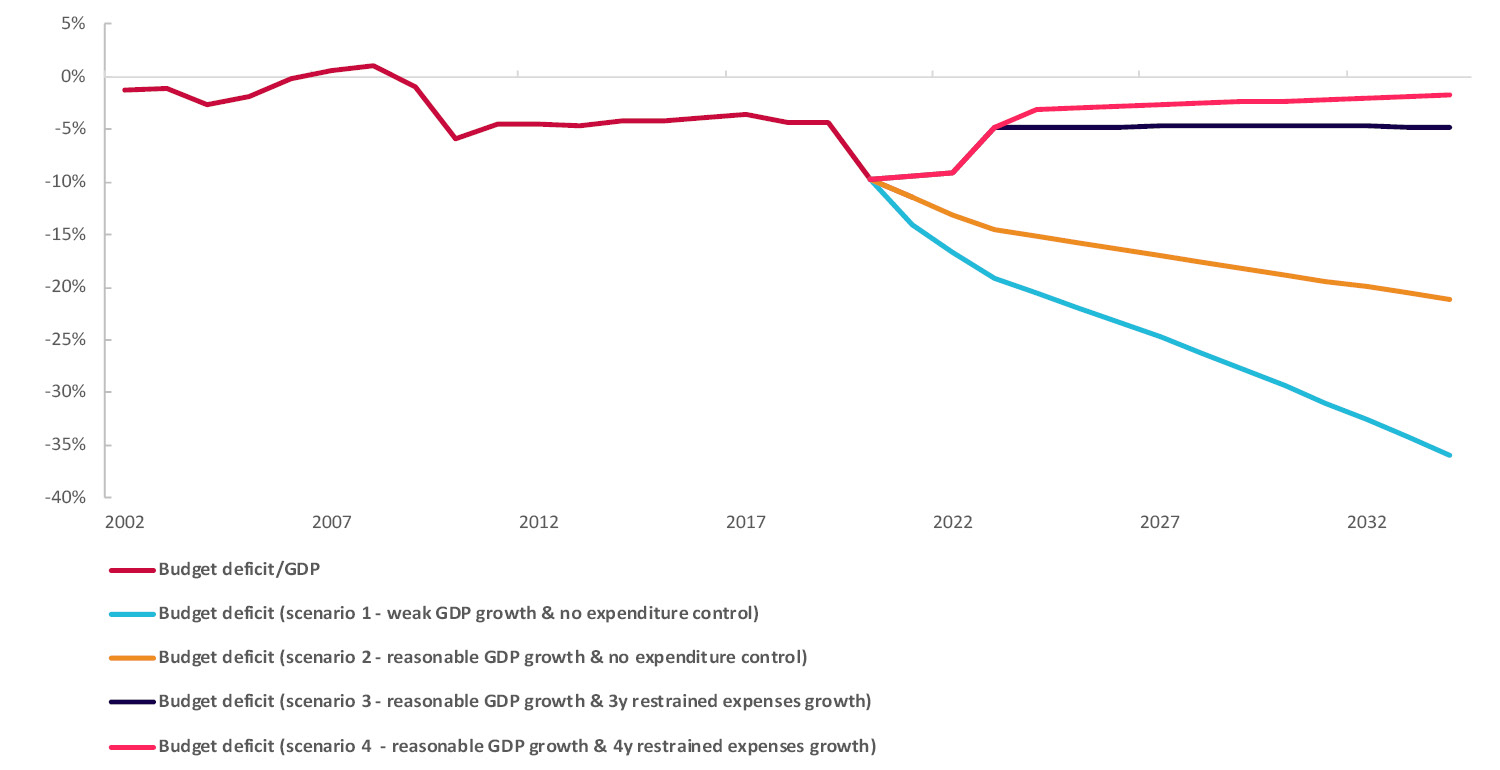 Argentina has defaulted 9 times, since independence from Spain in 1816. SA has only done so once to date. Looking forward, SA does not lend itself to austerity economics, possessing bloated public services and rigid unions, not dissimilar to Argentina. Our guess is that populist politics will win out against conservatism in debt management.

An important distinction between SA’s public finances and Argentina’s, is that the proportion of foreign or hard currency debt relative to total debt in SA is small, about 10%, whereas the majority of the US$285 billion owed by Argentina is denominated in hard currency.
As evidenced on the previous page, higher levels of indebtedness force higher interest payments for governments. In foreign currency, this challenge is only compounded by currency depreciation multiplying the interest payment burden. This ultimately breaks the back of indebted countries, the story of Argentina.

SA does not face this exact issue, yes our escalating indebtedness is causing interest rates to rise and so too resulting in Rand weakness, but foreign debt repayments will not be our undoing.

Where to from here, the transmission mechanism in SA

Our view on SA’s glide scope:

The South African economy is in poor shape and we face numerous complex economic headwinds which include an elevated Gini coefficient, substandard education levels and rising unemployment. Consequently, our citizens are vulnerable and the current misdirected economics are compounding this sorry state.

In conclusion, our article has not sort to answer or for that matter solve the, “unanswerable”, moral and symbolic arguments of the SA government’s populist tendencies; this we leave in the hands of political analysts and politicians. What we base our conclusion on is empirical data together with the historical trend we are observing being played out in SA. Our view is that the SA government has little choice but to actively reduce public expenditure, redirect the remaining budget to productive assets and cultivate a business friendly environment.

“Widespread intellectual and moral docility may be convenient for leaders in the short term, but it is suicidal for nations in the long term.”
― Carl Sagan