Home / QUARTERLY REPORT / Rotation to value – is it sustainable?

Rotation to value – is it sustainable?

Recent developments have provided a breakout opportunity for Value stocks from a point of extreme multi-decade underperformance against Growth. In this article, we analyse the reasons for this underperformance, explain why we are sympathetic to some of the arguments made against traditional measures of Value and reveal how Northstar portfolios are positioned in response.

The US election outcome, notably the legislative gridlock in Congress, combined with positive news on the COVID-19 vaccine developments, has provided a breakout opportunity for Value stocks from a point of extreme, multi-decade underperformance.

Having underperformed the MSCI World Index by 2.87% on an annualised basis since March 2009, the MSCI World Value Index¹ posted its best monthly gain since the Global Financial Crisis (2007/2008), rising 15.01% in November against broader market gains of 12.79% and in so doing registering the largest factor shift between Value and Growth on record. 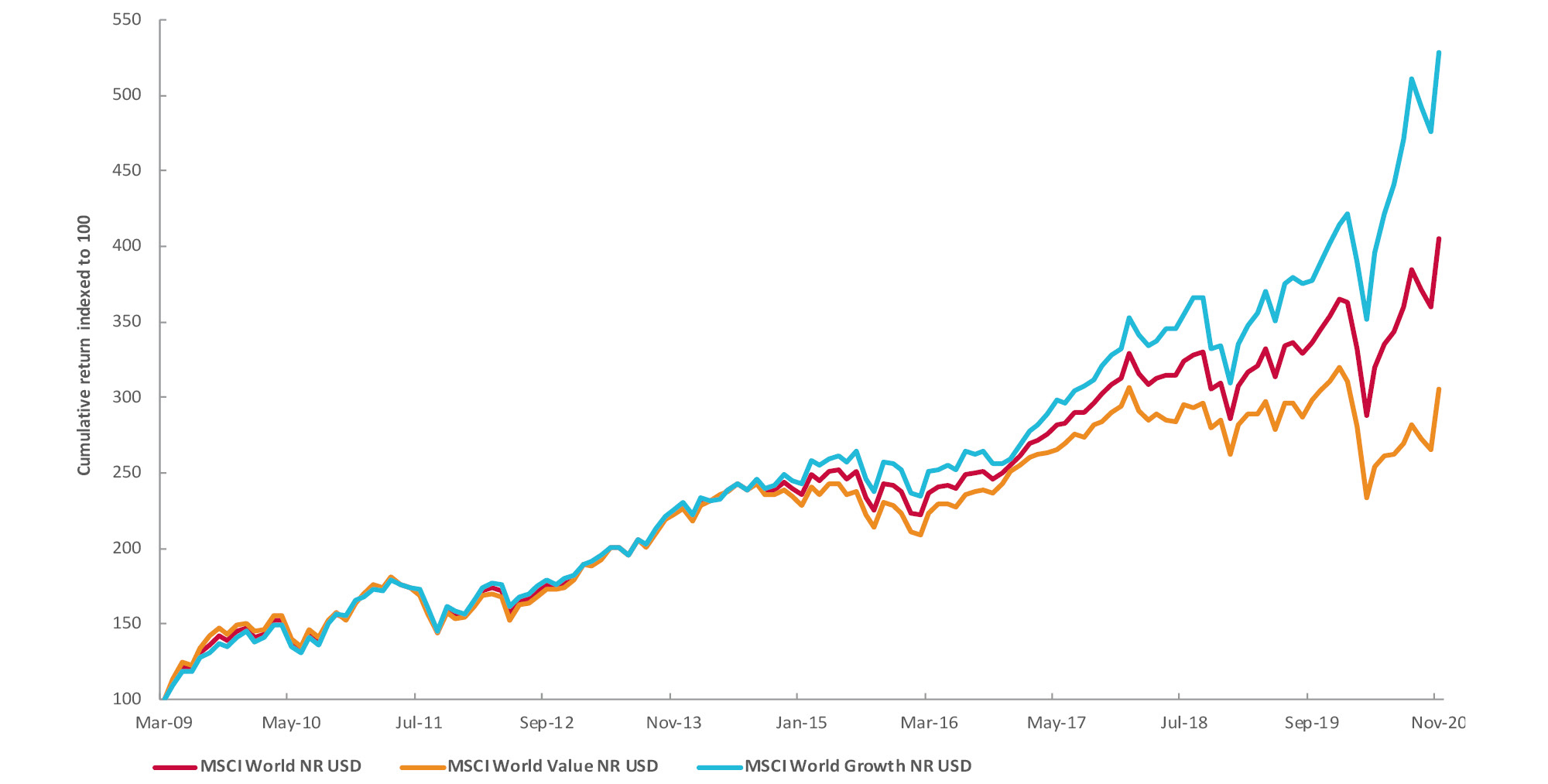 Marked outperformance by economically sensitive sectors, emerging markets and cyclical sectors is typical in reflationary periods, driven by the prospect of synchronised global growth and greater risk appetite. More pronounced in the current cycle is the shift out of so-called structural Growth or Momentum stocks, which have outperformed meaningfully and benefitted greatly throughout lockdown.

Why has Value underperformed?

The underperformance of Value against Growth as an investment style is generally ascribed to a multi-decade secular decline in interest rates. Lower interest rates boost the terminal value (on a present value basis) of high-growth companies at the expense of low-growth companies, as, for the former, a greater proportion of the value resides over a more discrete and shorter forecast timeframe.

Near-zero interest rates have therefore had the effect of bringing forward the value of long-duration structural Growth companies, since the opportunity cost of waiting for the growth to be delivered has been so greatly reduced.

This relative performance dynamic has been pronounced since the Global Financial Crisis, a period which has been characterised by unorthodox monetary policy, relatively meagre global growth and the rise of a group of companies, many with internet-enabled business models, which have achieved significant scale and market dominant positions in record time.

The valuation dispersion between Growth and Value stocks is now as wide or wider than at any time since the Tech Bubble in 2000, with North American Growth stocks trading at 5 times Value stocks on a price-to-book basis, according to data compiled by Sanford C. Bernstein.

While remaining committed to investing within a disciplined valuation framework, we have sympathy with many of the arguments posited for the structural challenges faced by traditional measures of Value. Notably, the growing importance of intangible assets and the extent to which these are not reflected on company balance sheets poses a challenge to asset-based measures of Value, such as price to book.

Consider Alphabet, the holding company for Google, with a brand value of US$323 billion according to the BrandZ Top 100 Most Valuable Global Brand Rankings for 2020. Alphabet has a market capitalization of US$1.2 trillion, yet under current accounting rules only recognises intangible assets of US$24.5 billion on its balance sheet.

Alphabet therefore trades on a price to book ratio of about 5.9 times on its reported balance sheet. However, if we were to assume the BrandZ valuation of the Google brand is accurate (for simplicity ignoring the value of the other brands owned by Alphabet, which include YouTube, Android etc.), we could make a reasonable argument for a price to book ratio of closer to 2.3 times.

By making additional adjustments to Alphabet’s asset base to reflect economic as opposed to accounting reality, we could capitalise a portion of research and development spend to reflect intellectual capital or a portion of the company’s employee compensation to reflect the human capital and know-how built up over the 22 years since its founding, deriving a cheaper valuation still.

Extrapolate this phenomenon across a number of large, predominantly technology-focused companies, such as Apple, Amazon and Microsoft, which dominate market capitalisation-based indices and the argument for the Value discrepancy becomes a little more tenuous. In fact, a number of studies, most notably by Research Affiliates², have shown that Value indices adjusted for intangible assets have performed far better than the traditional Value indices.

Is the current Value rally sustainable?

Despite the structural challenges, there is no doubt that relative valuations remain stretched and therefore the rally in Value stocks could be sustained. Further improvements in the global economic backdrop will result in higher bond yields, which should also translate into a greater dispersion of returns, generally a good environment for active stockpickers, such as Northstar. However, the environment is more likely to favour areas of the market, such as Industrials, Energy and Banks, where we have traditionally not invested, due to the relative scarcity of companies which exhibit durable competitive advantages.

How are Northstar portfolios positioned to benefit?

Over the course of the past six months, but more specifically in the wake of the market correction in February and March, we have been able to make investments in a number of companies, which had been on our watchlist but for which the valuations were prohibitive. We highlighted investments in two of these, namely Goldman Sachs and TransDigm, in previous editions of the Northstar Quarterly.

By broadening our Global Flexible Fund selection, we achieved greater diversification, which in turn enabled us to introduce a greater number of more cyclically-exposed companies, which have delivered very strong performances over the course of the past quarter. Examples of these include Jones Lang LaSalle the property service company, Accor, a French hotel operator, L3Harris Technologies, an aerospace and defence contractor, and Charles Schwab, a brokerage.

In this way we have ensured that our portfolio continues to participate in the market gains without sacrificing our criteria for only investing in companies with durable business models and exhibiting a sustainable competitive advantage. As always, we only deploy funds when the companies we like are trading at a meaningful discount to our assessment of the fundamentally derived intrinsic value, a more nuanced and realistic assessment of the true business value.